The 1992 UN Earth Summit held in Rio de Janeiro led to the Kyoto Protocol in 1997, which was supposed to establish the bases to reduce carbon emissions, a process named mitigation, to a level safer for all. However, global CO2 emissions have increased by 50% since 1992, causing concentrations in the atmosphere to increase by 11%. As the graphic below shows, a record 34 billion tonnes of carbon dioxide were emitted into the atmosphere in 2012, despite all mitigation efforts taking place around the world. 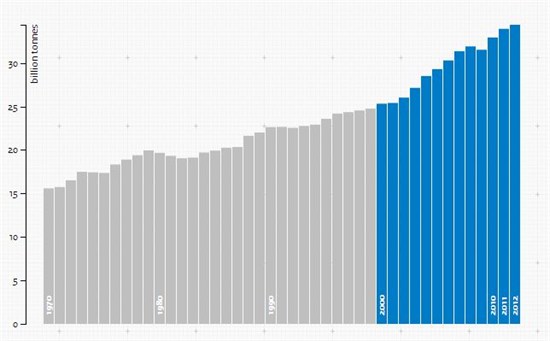 In fact, global CO2 emissions have not ceased to increase since 1992, causing concentrations in the atmosphere to actually rise by 11% in only the last 20 years. The following map with the red circles shows the major carbon emitters per regions in 2012. 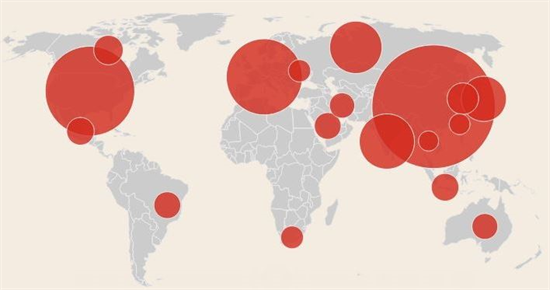 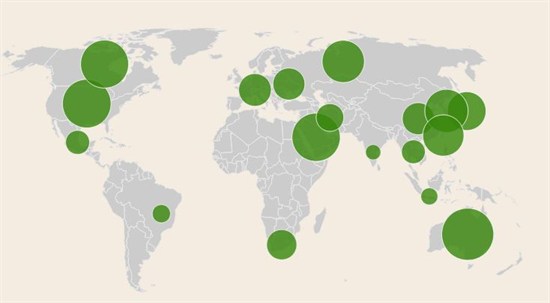 Relatively small populations have the highest rates of emissions. Australia gets first position, (18.8 tonnes of CO2 per capita), with the US just behind (16.4). Saudi Arabia, with its 30 million people, ranks in 3rd position (16.2).  Big country emitters in absolute terms, but with huge poorer populations like China, Brazil and India have much lower per capita emissions (7.1, 2.3, and 1.6 respectively), falling then back to positions 11th, 16th and 18th in the big emitters list.

The eight member countries of the Central American Integration System or SICA (Belice, Guatemala, El Salvador, Honduras, Nicaragua, Costa Rica, Dominican Republic and Panama), altogether, are accountable for 0.5% of global greenhouse gas emissions and, therefore, do not have the obligation to reduce those emissions. They have international commitments to design and implement measures to adapt to the impacts of climate change in order to reduce the vulnerability of their populations and territories. . Despite this, SICA countries make real efforts to mitigate. According to the Climate Change National Committe of Panama (CONACCP), the country has advanced on mitigation by developing Nationally Appropriate Mitigation Actions (NAMAs), and participating in the Clean Development Mechanism (CDM), and Reducing Emissions from Forest Degradation and Deforestation programs (REDD, more information on some of these lucrative mitigation mechanisms in the section of CC Impacts in Central America).

While enormous efforts and resources are invested in mitigation schemes which, in global terms, have been shown for long to be inneffective,  Central America neglects climate change adaptation and risk reduction efforts, leaving unprotected their most vulnerable populations and their livelihoods.

Graphic and maps can be checked at:

I am a social anthropologist recently back in Europe after researching climate change impacts on communities at risk in Central America. In order to fund my research interests, I freelance translate and teach languages. I have three different blogs (translations, language teaching, research). So, whatever your need/interest is, please get in touch!!!